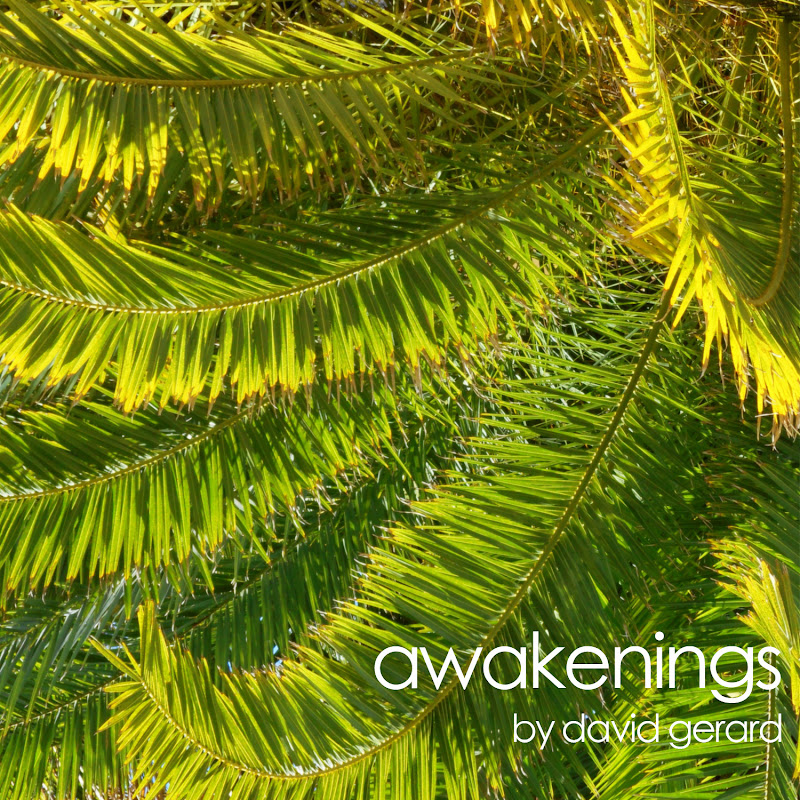 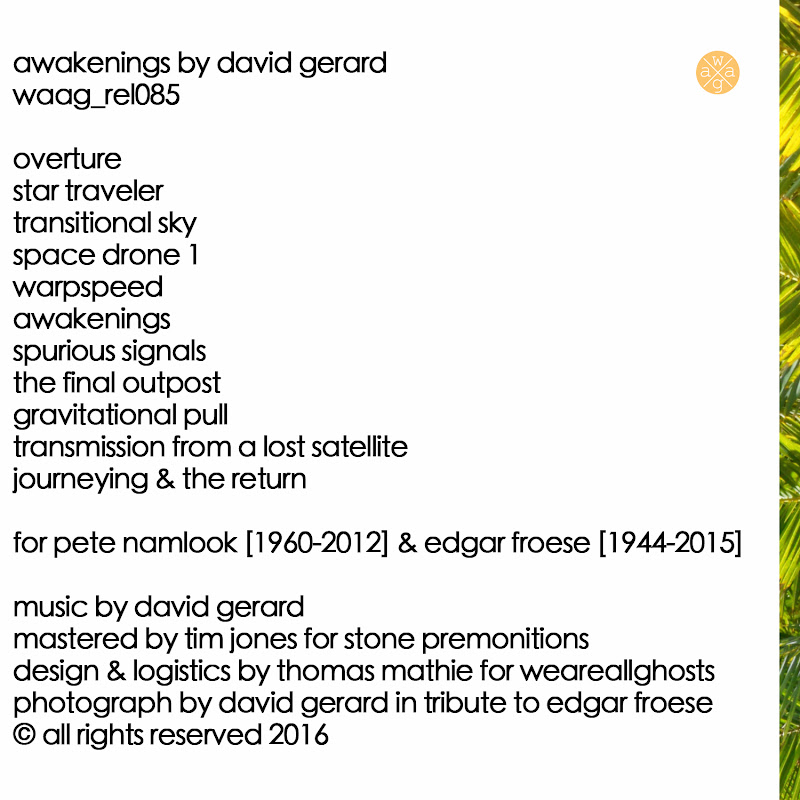 In 2012, ambient composer and musician Pete Namlook died of an apparent heart attack. His passing saddened the ambient music world, and Namlook's music will always stand as a testament to his talent. In 2015, we lost another electronic genius, tangerine dream founder Edgar Froese. I had first come to know Froese through MySpace, and I would send him links to whatever I was working on. Of course, Edgar was supportive of my work, especially my paean to him entitled, “scattered frequencies”, but he hardly saw me as a fledgling musician: “considering how long you have dedicated yourself to your art, I would consider you among my peers. You have developed your own style, and while I am flattered to hear that I have influenced your work, I admire what you have created ... it is uniquely yours.” So I was doubly saddened by his passing – I had really connected with a kindred spirit, and it seemed just as our friendship was growing, he was taken from not only me, but the many ambient artists who were inspired by his group and solo recordings.
Though I never got to converse with Namlook, whenever I listen to his music I get that strange sense of déjà-vu, much like what happened when I reached out to David Borden and Steve Drews of Mother Mallard's Portable Masterpiece Co. They both told me how my music hearkened to their halcyon days working with the inimitable Bob Moog in his studio/factory in Trumansburg, NY. It is an honour and a privilege to get such affirmation from the true pioneers in the electronic milieu. And yet, I had already mastered 2015's “homage” so it didn't seem fitting to just squeeze in some pieces dedicated to both men – besides, what I really wanted to do was less of a homage and more of an album in the classic tradition of electronic recordings, and dedicate the album to them in memoriam. And so that is what I set out to do: a gapless album to realize what those albums would have sounded like in their entirety, without the disadvantage of having to flip an LP or cassette over. I also make the album conform to what albums of that nature generally ran: so, no 60-80 minute extravaganzas – a 47-minute and some change aural odyssey through the universe of my mind. In much the same way previous releases “Bremsstrahlung” and “Music From The Pillars Of The Saints” were, this album ebbs and flows with a quality that is sometimes trancelike, and sometimes outerworldly. In fact, if you play this album in repeat mode, you will find that surprisingly everything comes full-circle as well as being cyclical in nature.
In my heart, I know their spirits are listening. And I can hear them doing so.

I was intrigued when David Gerard approached me at the start of 2016 with “Awakenings”, pitching it, as he has as a tribute to both Pete Namlook & Edgar Froese. When I received the raw file and listened to it, I was inspired … and a wee bit overwhelmed, if truth be told … it is an exceptional album and a fitting tribute to two giants of electronic music.

Awakenings is electronic music at it’s very best: expressive and utterly beguiling. I really hope you like it as much as I do!

This album will only be available to purchase on Bandcamp.

PS: Big shout out to Tim Jones from Stone Premonitions. I passed the album to him and he worked his mastering magic … not too soft, not too firm … just right … I should call him Goldilocks! Thanks Tim! 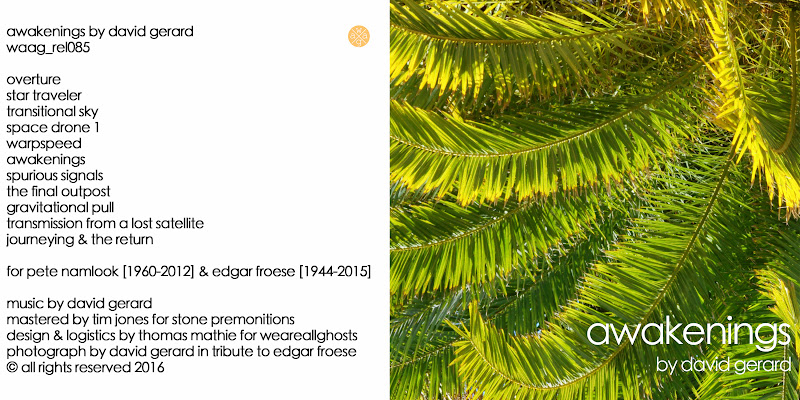