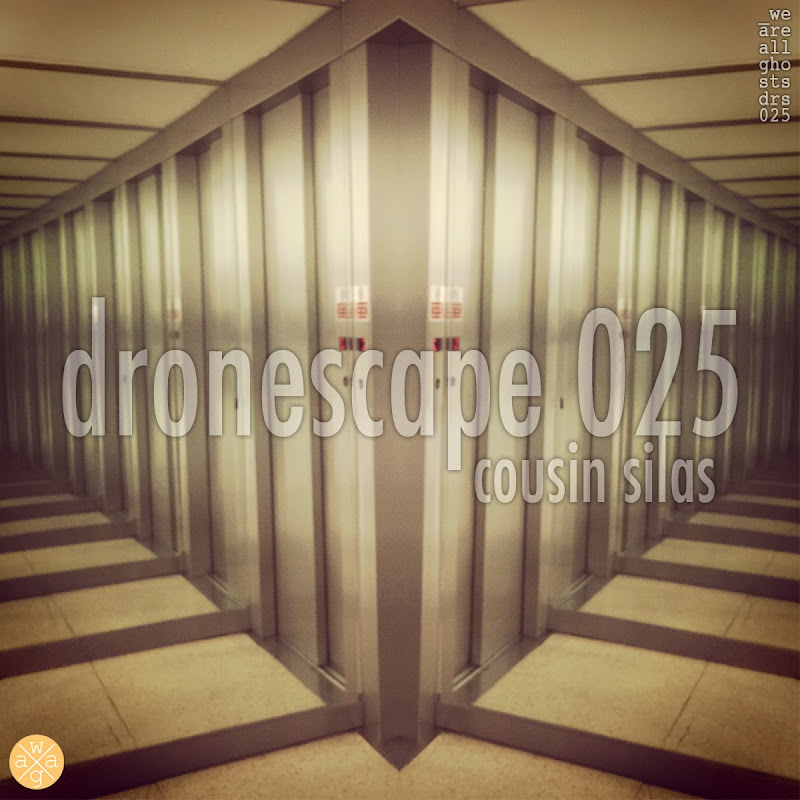 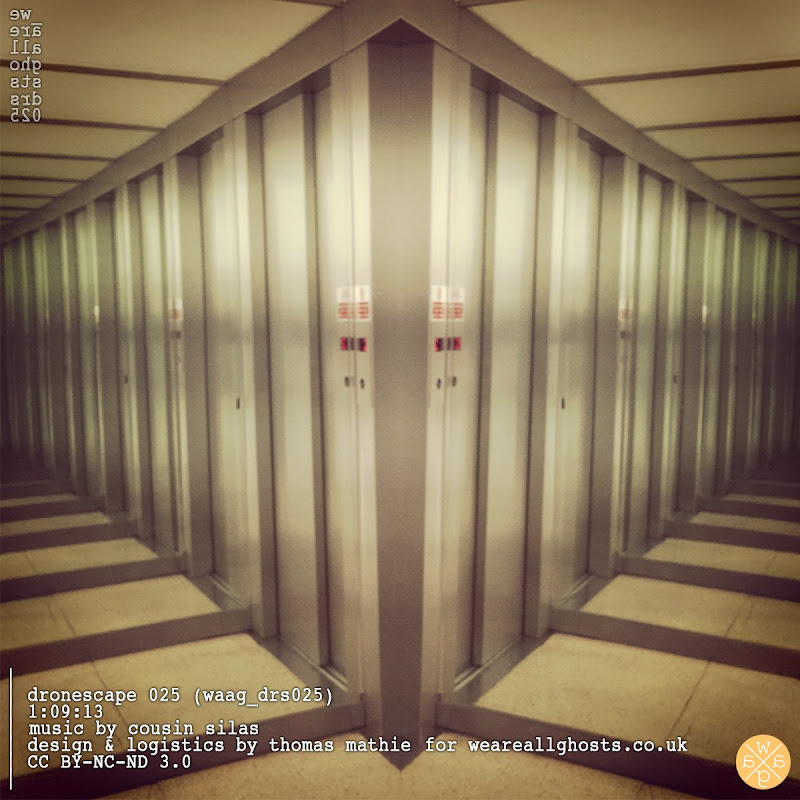 In a recent blog post, Joseph Mosby of josephmosby.com talked about using music to get “into the zone” … the zone being that point when we have complete concentration, complete focus. In his post he quotes Arkansas psychologist Elizabeth Hellmuth Margulis who wrote a book called “On Repeat: How Music Plays the Mind” that tangentially delves into this question … how does music on repeat help people to get focussed. This is what she says:

“Musical repetition gets us mentally imagining or singing through the bit we expect to come next… A sense of shared subjectivity with the music can arise. In descriptions of their most intense experiences of music, people often talk about a sense that the boundary between the music and themselves has dissolved.”


I regularly have one or two tracks on repeat too when trying to focus albeit the tracks I turn to tend to be post-70 minute monsters … longform drones that allow me to dissolve into the music. I get lost in the soundscapes and paradoxically find myself anew: I am able to focus and get stuff done by letting the curious part of my being wander in environments that feel simultaneously both new and familiar. It really does sound nuts and all a bit “out there” but it works for me … and for others … and I guess that’s the point.

The twenty-fifth dronescape from Cousin Silas is another belter of a journey: think dusk in a vast, open space where the darkness has yet to arrive and I am free to explore … calls are heard in the near-distance … I am not alone and yet I do not feel unsafe … the sun’s warmth is still prevalent and I feel at peace.

I really hope you enjoy “dronescape 025 (waag_drs025)” as much as I have … and it provides those looking for focus with what you so desperately seek.

A 320kbps version of this release is available over on Archive for free with a lossless version available on Bandcamp for ‘pay what you want’ which does include ‘free’. If you decide to download this album here for free, and you can with our best wishes, then all we ask is that you please tell people about it. 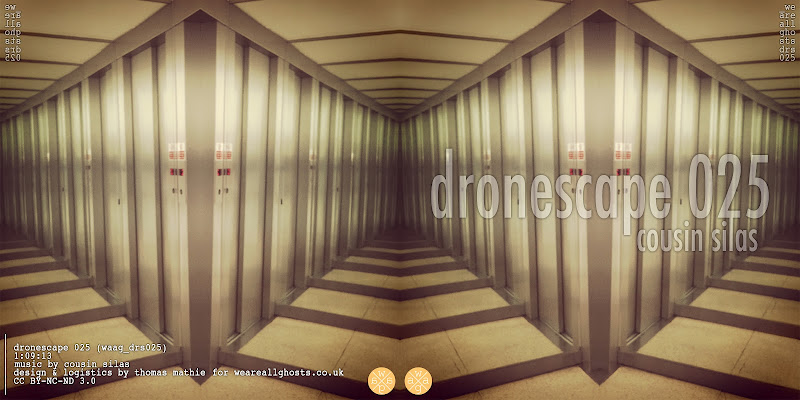 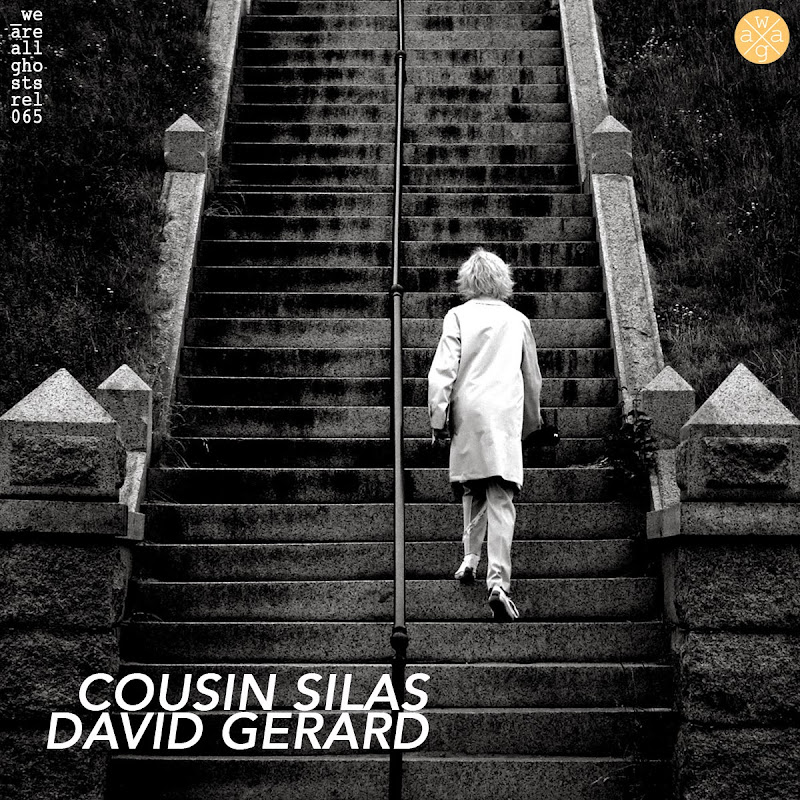 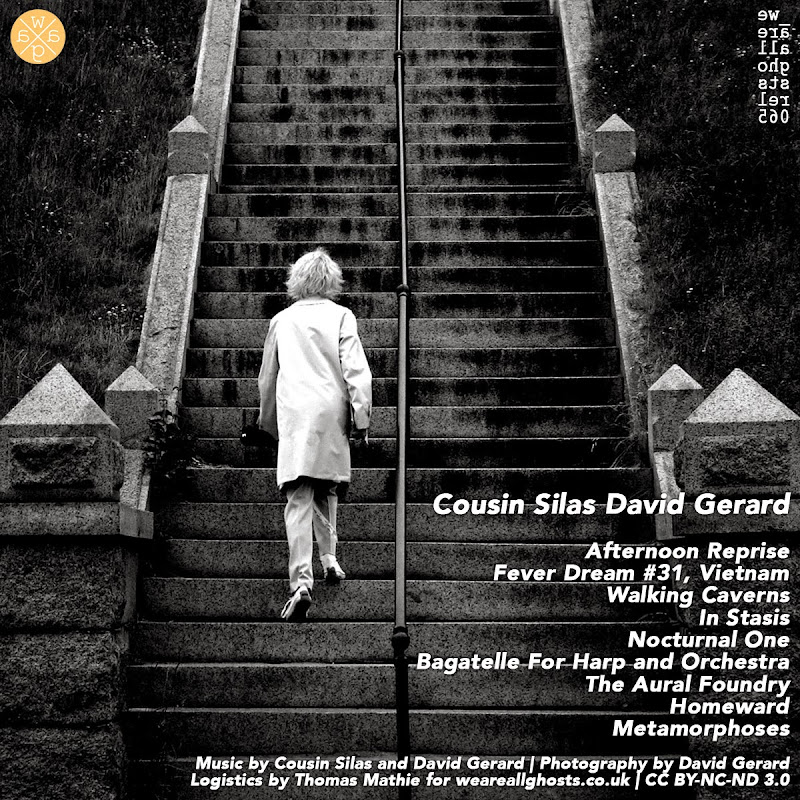 Cousin Silas is the reason weareallghosts exists. Not only is he our greatest patron, his music is the label's answer to the question "why?" ... Why did waag come into being? To release the music of Dave Hughes aka Cousin Silas. We've grown since those formative days ... we now exist to release the kind of experimental ambient electronic soundscapes that get little attention elsewhere & to do it in a manner that makes it accessible to all who want it.

I used to wonder why Cousin Silas collaborates so much & then I realised: it is his way of learning so he can progress to the next level. He soaks in every interaction and takes all he has gleaned and brings it to his next engagement. It really is fascinating to watch.

It is with all of this in mind that I present "Cousin Silas David Gerard (waag_rel065)", a meeting of minds and sounds from Cousin Silas and Dave Gerard, an album that ticks all my boxes. I found it immersive and deeply engaging. I found I couldn't identify where one man stops and the other starts. I can pinpoint sounds and textures used by both men now, after repeated listens, but I do consider this to be a truly seamless musical expression, one that has soundtracked my life and, in particular, my commute to and from Glasgow over the last few weeks.

We’ve experienced, first hand, when Cousin Silas clicks with someone: his collaborations with Kevin Lyons are remarkable and when you throw Ade Hodges into the mix, something truly magical appears. Something similar has happened here, in my opinion: two greats in the field of ambient electronic expression have some together to make something beautiful. From the opening of “Afternoon Reprise” (which makes me think of the opening to “where the streets have no name” by U2) to the final refrain of “Metamorphoses”, this is 76 minutes of sheer unadulterated ambient delight.

"Cousin Silas David Gerard (waag_rel065)" will sit prominently in the bodies of work of both men: an exemplary collaboration that shows the power and majesty when people work so selflessly together. The synergy on display is to be marvelled and cherished. It certainly will be by me.

I really do hope you enjoy "Cousin Silas David Gerard (waag_rel065)" as much as I do.

Cousin Silas and I have been friends and admirers of each other’s music – when preparing for my 16th solo release, Homage, I wrote a piece dedicated to him called (what else?) “For My Cousin, Silas.” David told me he felt I did a nice tribute to him, and would’ve been proud to put his name on it. That got me to thinking, “Hey! We should work on something.” After all, Silas has collaborated with a bunch of folks before (particularly on his “and friends” series of albums), and I think our styles are individual, yet simpatico. We started recording tracks in November of last year, while both multi-tasking on other album projects, and yet, things gelled instantly between David and I, and we were able to put a full recording together in an amazingly short time period – I guess we were both “in the zone” and feeding off of each other’s creativity. At the end of the day, you can say we created a musical work that we’re proud of, and had a blast doing. I suspect you’ve haven’t heard the last from us. 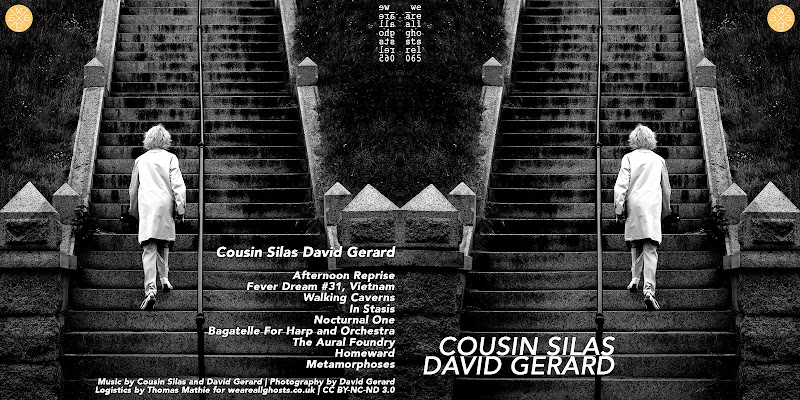 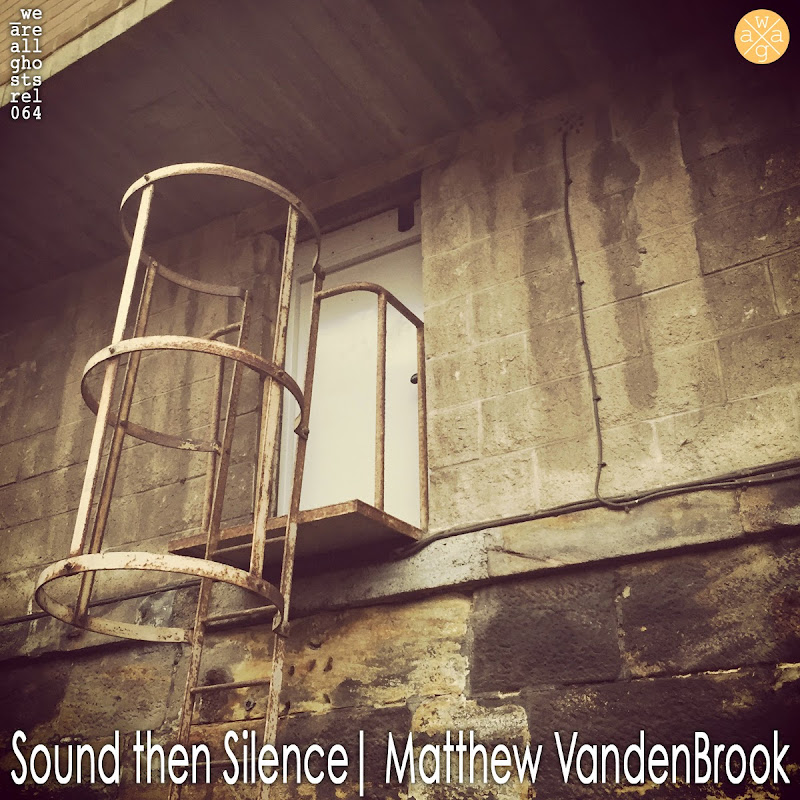 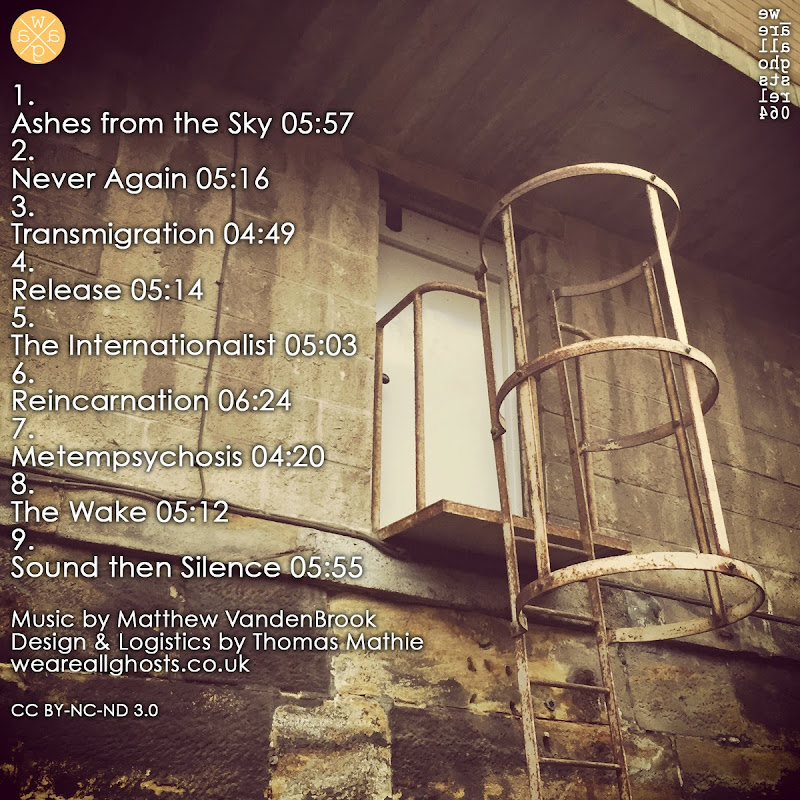 “Sound then Silence (waag_rel064)” from Matthew VandenBrook is a wonderfully inventive album that brings a new dimension of sound to weareallghosts, something uniquely expressive and engaging.

“Sound then Silence (waag_rel064)” explores more electronic and IDM-related genres, and does so in a manner that doesn’t negate VandenBrook’s ambient, drone-influenced, origins. In fact, tracks 6, 7 and 9 - “Reincarnation”, “Metempsychosis” and the title track “Sound then Silence” respectively - are the most delightful of ambient soundscapes. However, his use of percussive elements, found-sounds, sequencers and vocal samples to complement his emotive ambient electronic soundscapes on the remains really caught my attention and left me wanting more.

From the opening chords of “Ashes from the Sky” I knew I was in for a treat and I am delighted to say Matthew VandenBrook did not let me down. I cannot recommend “Sound then Silence (waag_rel064)” enough, it really has a hold of me and I hope it finds a place of prominence in your collection. 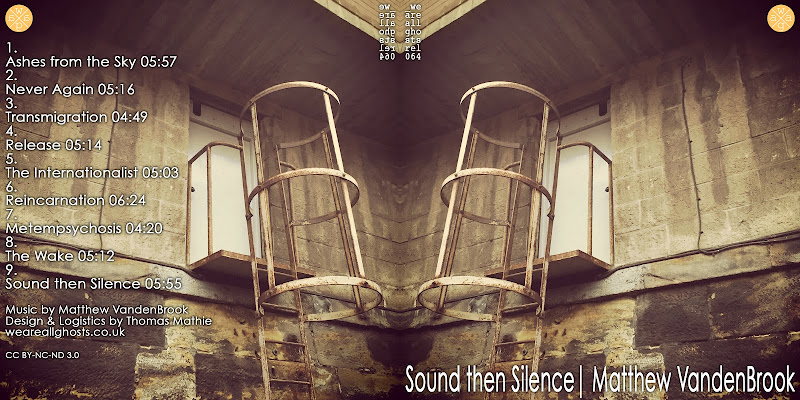