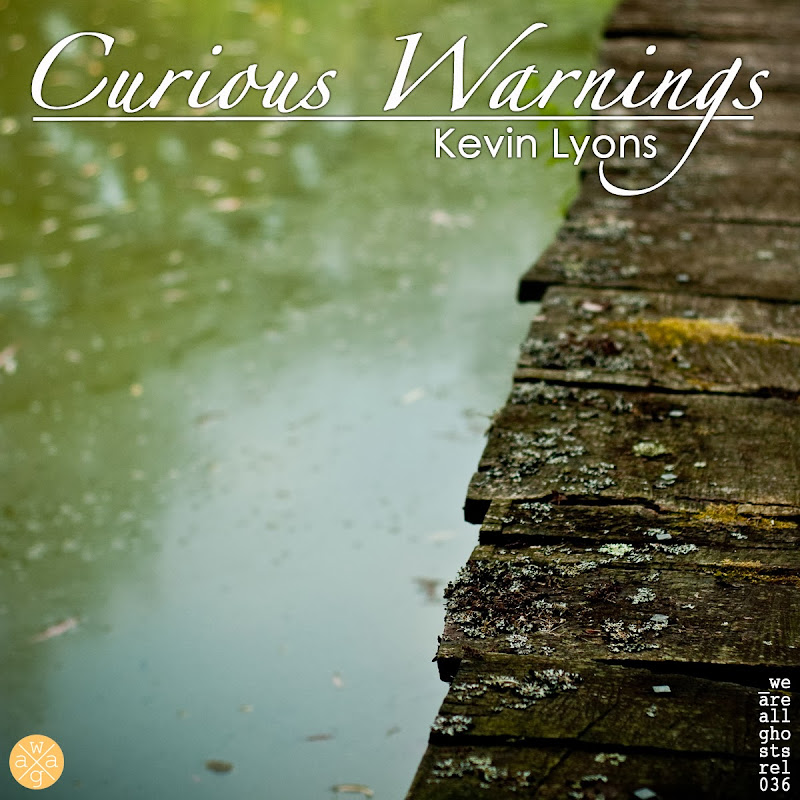 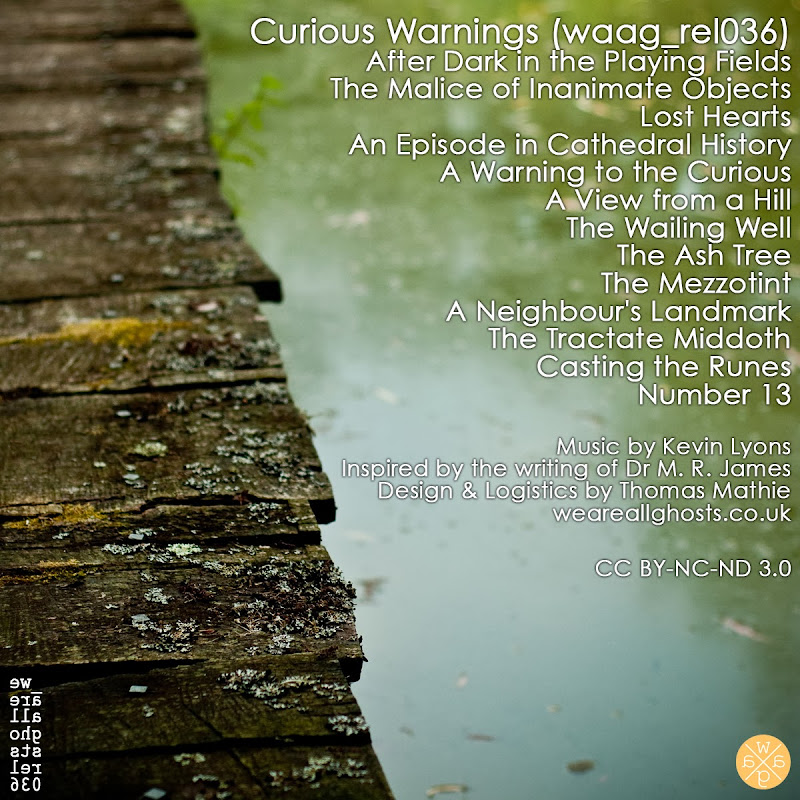 "St Bertrand de Comminges is a decayed town on the spurs of the Pyrenees, not very far from Toulouse, and still nearer to Bagnères-de-Luchon."


And so begins "Canon Alberic's Scrapbook" from Dr M. R. James' "Ghost Stories of an Antiquary" ... or at least my Penguin Books copy from May 1941 does.

I received this copy from Cousin Silas when I stayed at his house at the end of August. This was the weekend that I met Ade Hodges and Kevin Lyons, the weekend where Lyons explained his plans for a trilogy of dark ambient albums inspired by Dr M. R. James' writing.

To this point, I wasn't familiar with James' writing but was eager to know more. I am a big fan of 'weird fiction' and early 20th century sci-fi / horror ... Dr M. R. James' writing fit nicely into this list.

When Lyons told me of his intended trilogy, I was fascinated and wanted to know more - more about the music and the writer. I was not disappointed by either.

Curious Warnings (waag_rel036) is a real treat ... one that captures the deliciously uncomfortable nature of James' writing ... and translates the unsettling atmospheres into sound.

I do love some dark ambient and this album is a fine example of the genre. I hope you enjoy it as much as I do.

PS Amazon has Dr M. R. James' "Ghost Stories of an Antiquary" (parts 1 and 2) for the Kindle for free. Recommended reading ... especially on Christmas Eve. 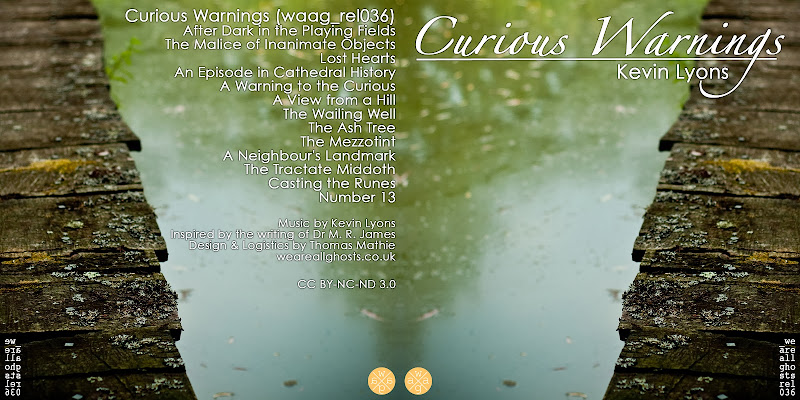 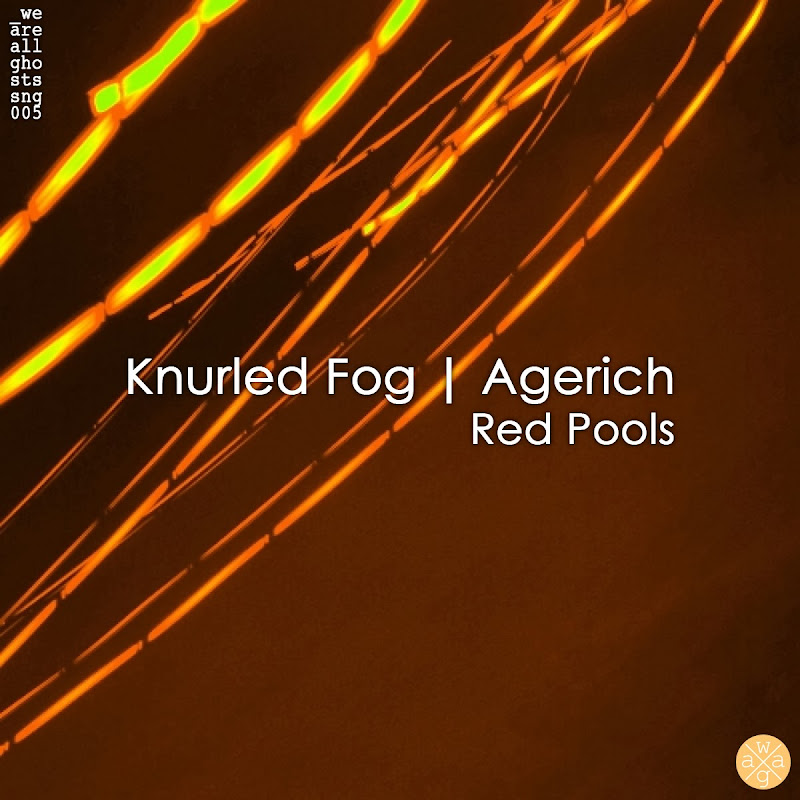 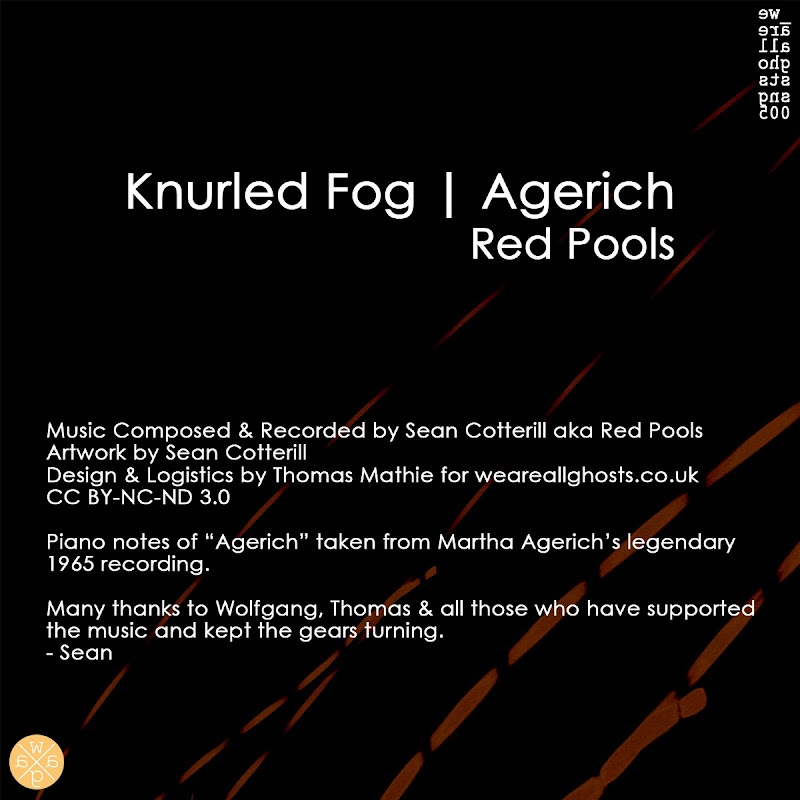 Since 2008 I have been producing and releasing music under various names, most notably electronic music under the name Artificial Sun Project. In 2013 I ended this project, and out of it's ashes came Red Pools.

This is my first double single of my new material, reflective of a new style of music, and a new direction.

Two sides of mournful techno ... with swaying, claustrophobic atmospheres that gurgle and crackle in a rather delightful manner with murky thumping, quasi-wurlizer, piano recomposition and intercepted transmissions.

Many thanks to Martha Agerich, Wolfgang Merx and Thomas Mathie.

waag_sng005 is dedicated to Steve Morton ... a true fan of music.

I am a big fan of Sean's music. His Artificial Sun Project was a real pleasure and I was one of a small but dedicated band who mourned the project's demise.

I was understandably delighted to hear of Red Pools rising, like a phoenix, from the ashes of ASP ... and over-the-moon when I was approached by Sean to release the first single.

Sean's description of his music - swaying, claustrophobic atmospheres - is apt and I welcome it, and him, to weareallghosts.

Any monies raised will go to Sean Cotterill to keep those musical gears turning.

Presenting ... "The Space Between The Leaves / Meadows of Summer (waag_rel035)" by Scott Lawlor 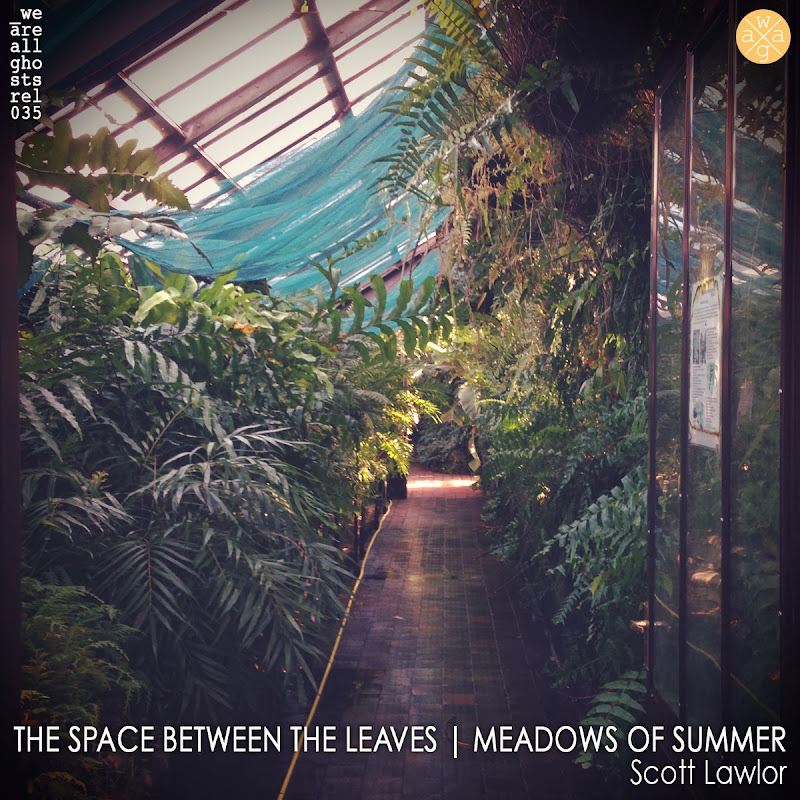 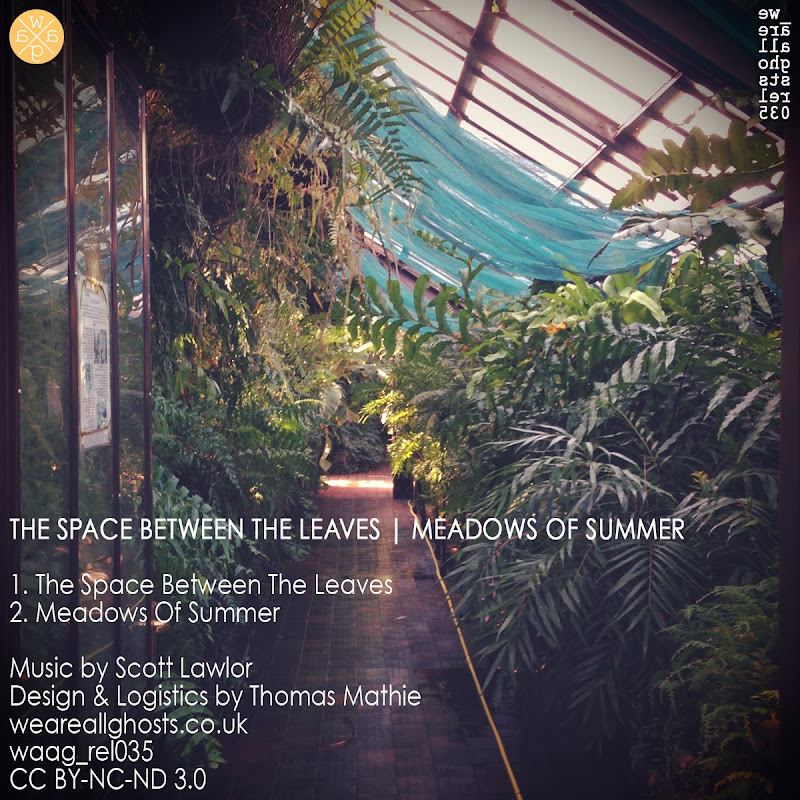 Scott Lawlor is a tremendous supporter of weareallghosts, playing our music on his show on stillstream. He is part of the waag familia  and I am proud to present two longish ambient drones from him.

"The Space Between The Leaves" - is the first in a series of longer-form drones called "The Space Between" ... this is an ongoing project from Scott and I hope to bring you further instalments in the future.

"...The Leaves" is a darker, noisier drone that almost overwhelms but ultimately rewards the listener with an immersive experience.

"Meadows In Summer" is a lighter longer-form piece with a haunting and rather surprising ending which I found an utter delight when I first heard it. 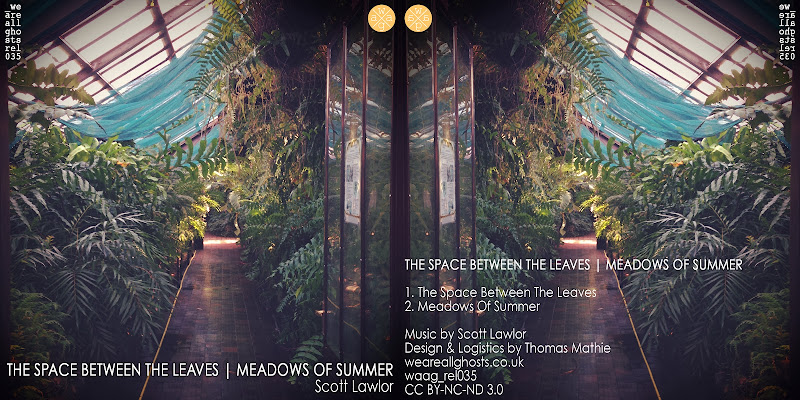 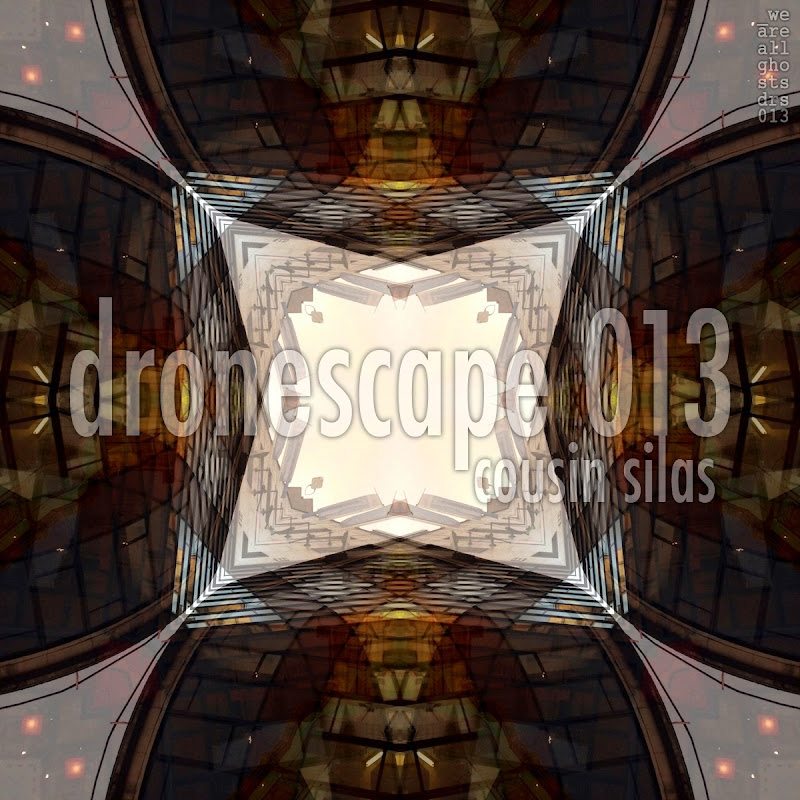 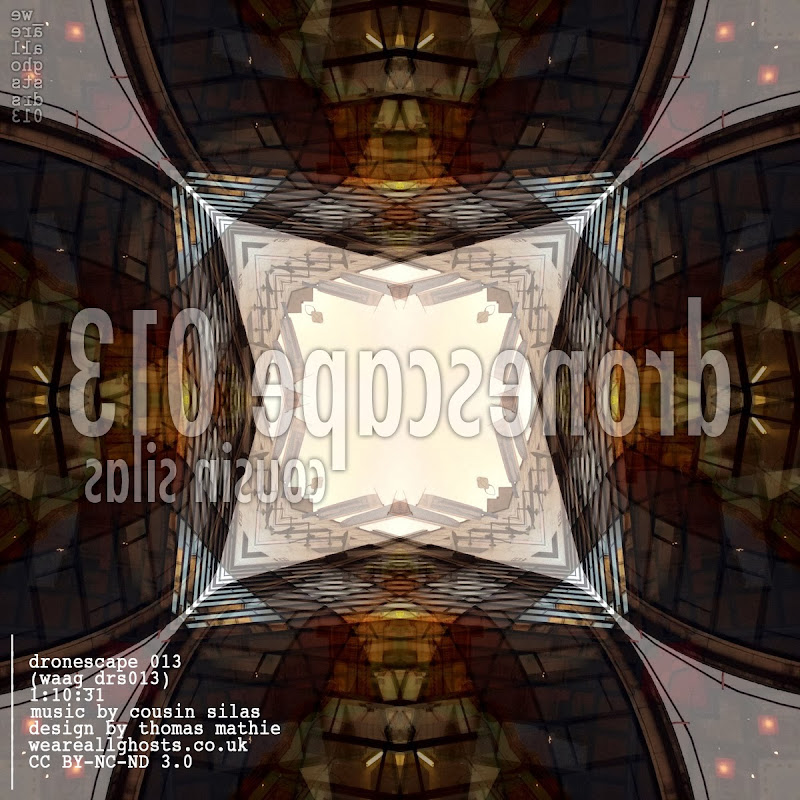 It has been just over a month since we released the previous 2 instalments of Cousin Silas' Dronescape series ... and I couldn't wait to bring another one to you.

And what an instalment this is!!! The 13th Dronescape is a bold, upfront exploration of space and time through ambient sound. It is 70 minutes of sheer of unadulterated joy ... a truly immersive longform journey with an almost tangible sense of cinematic proportion ... and I, for one, love it. This series just gets better and better.

An MP3 version of this album is available for free on Archive or a lossless version available on Bandcamp for 'pay what you want' which does include £0 (albeit paying supporters on Bandcamp also get unlimited mobile access to "Dronescape 013 (waag_drs013)" using the free Bandcamp listening app).

We are currently exploring options for a physical Cousin Silas release. Any funds raised by 013 will go towards this.

We will post more information regarding the physical release in due course but for now ... enjoy 013. 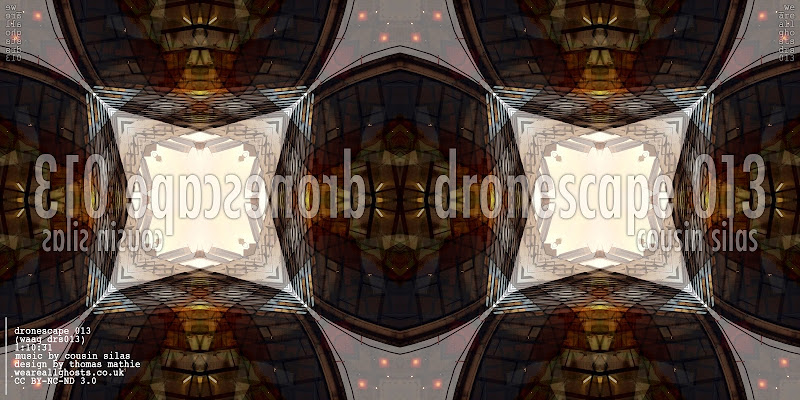